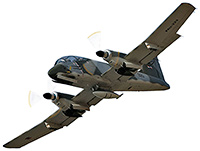 IA 58 is a two-seat light attack aircraft powered by two turboprop engines. It was designed for the COIN (counterinsurgency) and CAS (close air support) roles for the Argentine Air Force. It has narrow fuselage and tail section and a tandem seat cockpit with a steep sloping nose. Because of the steep nose the pilot has excellent forward visibility. Although heavily armed the weapons are unguided and visually aimed by the crew. The IA 58 only needs a minimum of ground support to operate, it is able to operate from unprepared rough terrains.

The IA 58A is the main production variant of the PucarĂˇ design. About 108 aircraft were built for Argentina of which 6 were sold to Uruguay. About 3 aircraft were captured by the United Kingdom during the Falkland War, they are now preserved by the RAF.
The IA 58B is basically a IA 58A with 30mm cannons in place of the 20mm cannons present in the A model. Although a prototype has been developed, none were produced.
The IA 58C is a mulri-role single-seat version of the PucarĂˇ. The changes included the addition of a Head-up Display, IFF (identification friend of foe), 30-mm DEFA 553 cannons in the nose, two extra hardpoints for Magic 2 Air-to-Air missiles and additional weapons capability, including Martin Pescador anti-ship missiles.
The IA 66 prototype was a IA 58A model fitted with 1,000-shp Garrett TPE331-11-601W turboprops, none were produced.

The IA 58A is also operated by Colombia, Sri Lanka and Uruguay but only in small numbers.

Two-seat IA 58A close up