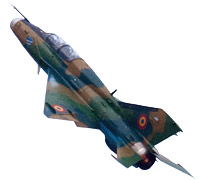 The Mikoyan OKB started development of the supersonic light tactical fighter in the early 1950s, resulting in the first design designated Ye-1 in 1954. The Ye-1 evolved into the Ye-2, Ye-50, Ye-4 prototypes. Ye-5 incorporated the Ye-4's delta-wing configuration and was powered by the new AM-11 turbojet engine (later designated R-11-300). The Ye-5 was put into limited initial production at Tbisili as the MiG-21 (sans-suffix, NATO: Fishbed-A). The Ye-5/MiG-21 evolved into the improved Ye-6/MiG-21F powered by the improved R-11F-300 before entering full production and state trails. The Ye-6 prototype first flew on 20 May 1958, but was lost in a crash on 28 May 1958. The second Ye-6 prototype was converted from a Tbisili-built MiG-21 and together with a third Ye-6 entered flight test program and state acceptance trails. The MiG-21F was ordered into production for service.

The MiG-21F (NATO:'Fishbed-C') entered production in 1959 at two aircraft factories: No. 21 in Gorky and No. 31 in Tbilisi. Although production at Tbilisi was limited to just ten MiG-21F. Gorky produced 73 MiG-21F version. Air combat weapons consisted only the cannons, most aircraft produced equipped with two NR-30 30mm cannons with 60 rounds each and a gun ranging radar and sight. The MiG-21F's strike capability was also added, which in addition to a range of unguided bombs up to 500kg and rocket pods introduced the S-24 heavy unguided rocket to the MiG-21.

With the advent of the K-13 IR-homing air-to-air missile (NATO: AA-2 'Atoll') copied from a captured AIM-9 Sidewinder, the MiG-21P-13 (Ye-7) interceptor version was being developed. Following Ye-6 trails with the K-13, and because development of the radar-equipped MiG-21P-13 (Ye-7) was coping with delays, the Ye-6T improvements and K-13 missile were incorporated into the MiG-21F. Production at Gorky shifted to the MiG-21F-13 version from mid-1960 onwards, producing 373 MiG-21F-13s up to early 1962 when the Moscow Machinery Plant No.30 started produced the variant until 1965. It was also built under license by Aero of Czechoslavakia and China, shortly in Shenyang then Chengdu, starting the J-7/F-7 family. The MiG-21F-13 had upgraded gunsight and ranging radar, as well as various early improvements to the MiG-21F design introduced during the course of production. The MiG-21F-13 was fitted with two K-13 (R-3S) missiles and one NR-30 cannon with 30 rounds. Only having the gunsight with radar rangefinder was limited to intercepts at day and in clear weather. The MiG-21F-13 could also perform air-to-ground strikes like the MiG-21F, but was still limited to three hardpoints.

Meanwhile the MiG-21P all-weather day/night interceptor was developed equipped with the TsD-30 model of the Su-9's RP-9 radar. The radar required a redesign of the nose and enlarged intake diameter to fit the radar on the intake centrebody. The cannon was deleted due to the higher take-off weight because of the heavy radar set. The gunsight was replaced by the PKI-5 collimator sight, still allowing for unguided air-to-ground munitions aiming and also engaging aerial targets with unguided rockets. The MiG-21P-13 received command link equipment for ground controlled intercepts. Despite the loss of the first two prototypes the MiG-21P-13 was ordered into production as the MiG-21PF. The third Ye-7 prototype first flight took place on 11 May 1960, fitted with the uprated R-11F2-300 engine and TsD-30T (RP-9-21) radar, among improvements to the design and systems introduced after the loss of the first prototype. The first production interceptor MiG-21PF (NATO: 'Fishbed-D') made its first flight on 28 June 1961.

From 1962 onwards, the MiG-21PF had received several design changes and the improved TsD-30TP radar, named the RP-21 Sapfir (NATO 'Spin Scan-A'), and also implemented the MiG-19's RS-2US AAM. Further improvements gave rise to the MiG-21PFS (Ye-7SPS) designation for three different versions, the latest version with broader tail was referred to as 'Fishbed-F' by NATO.

The MiG-21PFS structural improvements were combined with an updated fire control system in the Ye-7M prototype. The MiG-21PFS produced at Gorky received the upgraded equipment of the Ye-7M and MiG-21PFM designation. The MiG-21PFM introduced the improved RP-21M radar and the GP-9 centreline gunpod holding the twin-barrel GSh-23 23mm cannon. The late production MiG-21PFS with the larger tail were in service also referred to as MiG-21PFM due their external similarity. In 1966, the Kh-66 radar beam-riding air-to-surface missile was introduced to the MiG-21PFM to expand its tactical envelop for the Frontal Aviation units of the VVS.

The Gorky plant produced the Soviet MiG-21PFs in 1962-1968, while the Moscow plant produced the MiG-21PFs for Warsaw Pact users in 1964-1968 with different IFF, and earlier MiG-21PFM models were supplied without the improved RP-21M radar and GP-9 pod. The version for export of the MiG-21PF outside of the Warsaw Pact was designated MiG-21FL, among various changes was the earlier R-11F-300 engine and simplified R1L version of the RP-21 radar, removing the RS-2-US capability. MiG-21FL production took place at Moscow from 1965 to 1968, and under license by HAL in Nasik, India. Later the Indian-built MiG-21FL received the R2L radar, the export version of the improved RP-21M. Externally it's similar to the second configuration of the MiG-21PFS.

Converted from MiG-21PFS production aircraft, the Mikoyan OKB developed the Ye-7R reconnaissance version, fitted with day photo, night photo, ELINT or TV camera pods. MiG-21R (NATO: 'Fishbed-H') production took place at Gorky from 1965 to 1971, gradually introducing improvements including a new fuel tank on the fuselage spine. The first MiG-21R was rolled out in early 1996. The initial MiG-21R had the R-11F2S-300 engine, later MiG-21RF aircraft received the new R-13-300 turbojet. The MiG-21R maintained the radar and could be used as interceptor or strike aircraft alternatively. The MiG-21R had four under-wing hardpoints, with the outer ones capable of carrying fuel tanks.

Introducing the Sapfeer-21 radar (S-21 or RP-22, NATO: 'Jay Bird') the Ye-7S was test flown on 21 September 1963. The Sapfeer radar worked with the K-13R (R-3R) semi-active radar guided missile. The MiG-21S received updated GCI command link and SPO-10 RHAWS. The MiG-21S (NATO: 'Fishbed-J') was produced from 1965 to 1968, solely for the USSR. The MiG-21S was powered by the improved R-11F2S-300 engine and received the fuselage spine fuel tank and four under-wing hardpoints like the MiG-21R. A small number of MiG-21S were modified into to deliver a single RN-25 tactical nuclear bomb, designated MiG-21SN or MiG-21N. The export version of the MiG-21S was the MiG-21M, which still had the older RP-21MA radar and lacked the radar-homing R-3R missiles. The MiG-21M was fitted with an internal GSh-23L 23mm cannon ahead of the centreline pylon. The MiG-21M was produced by the USSR from 1964 to 1971 in slightly different configurations. India licensed the MiG-21M for production by HAL, the first Indian-built MiG-21M was delivered on 14th February 1973.

Implementing the new R-13-300 turbojet, the MiG-21S was updated to MiG-21SM. The internal GSh-23L and updated gunsight of the MiG-21M was also added. From 1969 the MiG-21SM replaced the MiG-21S on the production line and became the most numerous type in Soviet service. Later the 'fatback' MiG-21SMT (NATO: 'Fishbed-K')provided a higher fuel capacity. The R-60 IR guided AAM was also added. The R-13-300 turbojet and in some cases the RP-22 radar had been retrofitted to the export MiG-21M in some countries. The export version of the MiG-21SM was designated MiG-21MF and produced in Moscow alongside the MiG-21M in 1970 until 1974. MiG-21MF production was transferred to Gorky beginning in 1975. HAL licensed-built the MiG-21MF.

The final generation built was the MiG-21bis 'Fishbed-L' with more aerodynamic and lighter airframe, new R-25-300 turbojet, and updated avionics, including the improved Sapfeer-21M (RP-22M) radar. The outer wing pylons could carry a pair R-60 IR-guided AAM and the R-13M was added to replace the R-3S. The MiG-21bis entered flight testing in 1971, entering production at Gorky until 1974. The version for PVO 'Fishbed-L' retained the Lazoor-M GCI command link of the MiG-21S, while the VVS version 'Fishbed-N' received the Polyot-OI ILS which was incompatible with the GCI guidance. The MiG-21bis was exported to all Warsaw Pact nations except Czechoslovakia and India's HAL licensed built 225 MiG-21bis from 1980 to 1987.

Over 15 variants were developed and more than 8000 aircraft were produced. In addition to the single-seat, the two-seat MiG-21U and later MiG-21US and MiG-21UM training versions were produced at Tbilisi. The two-seaters received the NATO 'mongol' code-name. The early MiG-21F-13 design was exported and licensed to China which started its own development and production of derivatives, designated J-7 (F-7 for export), when Chengdu took over the J-7 production from Shenyang. The J-7 family developed distinct versions, with the exception of the J-7III which was a copy of the MiG-21M. China also developed a two-seat version, designated JJ-7 (FT-7 for export), build by Guizhou.

The MiG-21-93 was a proposed upgrade by MAPO MiG launched in 1991, based around a new Kopyo radar, capable of the semi-active R-27R1 and active RVV-AE (R-77) BVR missiles and more advanced air-to-surface missiles beyond the Kh-66. The cockpit and avionics were modernized and also the new R-73 IIR missile was implemented. It was also possible to opt for a more limited package for the mid-life update.
India opted for the more extensive upgrade of its MiG-21bis and MiG-21UM variants, designated UPG for upgrade, and named Bison incorporating the MiG-21-93's Kopyo radar and also adding Western equipment. The first two prototypes upgraded by MAPO MiG and NAZ Sokol arrived in India in December 2000. HAL started upgrading the remaining 123 aircraft, with the first HAL upgraded MiG-21bis UPG making its first flight in mid 2001. By mid-January 2006, 94 had been upgraded. The earlier MiG-21FL was retired from Indian service in December 2013, while the remaining non-upgraded MiG-21bis are scheduled to retire in 2016. The upgraded Bisons will stay in service for at least another decade.
Also IAI introduced an upgrade package, dubbed the MiG-21-2000, Elbit refurbished and updated Romanian MiG-21M/MF/UMs to the MiG-21 LanceR standard. The LanceR A is optimized for strike equipped with an EL/M-2001B radar, while the LanceR C air defense variant received the multi-mode EL/M-2032M radar. The upgraded MiG-21UM trainers were designated LanceR B.
Croatia in September 2002 contracted Aerostar to upgrade eight MiG-21bis and four MiG-21UM trainers for NATO interoperability. The first MiG-21bisD (-D for Doradjen, meaning upgraded in Croatian) flew in March 2003. Delaying the acquisition of a replacement fighter, Croatia decided in 2013 to have seven MiG-21UMD/bisD refurbished by Ukraine's SE Odessa Aircraft Plant, with an option for five overhauled MiG-21bisD single-seaters. The five MiG-21bis are overhauled ex-Yemeni Air Force aircraft from a cancelled contract brought up to the D standard. Deliveries are scheduled for 2014.