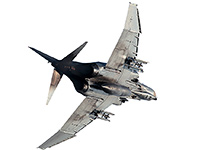 F4 Phantom Engine Start Up and Take Off

F4 Phantom starting engines and taxiing out for take off in Cleveland, Ohio during the 2011 Cleveland Air Show. The plane was on the ramp with the Thunderbirds at CLE during the weekend and this video was when it was…

A magic flight with Die Luftwaffe

A ballet of man and technology, featuring the song Mercy, by Jonathan Elias - sung by Alanis Morrisette.

(Audio only) Cockpit recording from RF-4C Phantom (callsign Dodge 1 NOT Fox as indicated in subtitles) during Vietnam War recon flight. Wingman (Dodge 2) is shot down by SA-2 Guideline missile. Capt Roger Ernest Behnfeldt was Dodge 2A (Pilot) and…

@the Hyakuri airforce base in Japan

The McDonnell Douglas F-4 Phantom II is a tandem two-seat, twin-engined, all-weather, long-range supersonic jet interceptor fighter/fighter-bomber originally developed for the U.S. Navy by McDonnell Aircraft. Proving highly adaptable, it became a major part of the air wings of the…

McDonnell-Douglas F-4 "Phantoms" from VF-74 during landing evolutions aboard the USS Forrestal (CV-59) during the Vietnam-era.

As low as you can go. Last flight for this fighter pilot. See the people running away as he passes by. May be they made a bet. The Original Vid doesn't contain any sound. So I put some free Youtube…

MCAS El Toro & the LAST RF4B Phantom to leave the base!

The USMC base at El Toro, California was closed a few years ago, and I was there. I helped move the base to MCAS Miramar, near San Diego. See the barracks, mess hall, and the old VMFP-3 / VMCJ-3 hangar.…

Here is the first airshowvision instalment from the Waddington International Airshow 2012, and features possibly the final visit in England of the McDonnell Douglas F4 Phantom of the German Air Force, before it is replaced by the Eurofighter Typhoon. The…

This is an 8mm movie of an F4 Phantom airstrike on VC near Binh Nham, Vietnam in 1967. This movie is not great quality but after 40 years, this is what you get. This is an update of an earlier…

'Phantoms' return to the boat

for more info visit http://www.aviationlive.org/forum/index.php apo tin ekpobi "me Areti kai Tolmi" The McDonnell Douglas F-4 Phantom II is a two-seat supersonic long-range all-weather fighter-bomber originally developed for the U.S. Navy by McDonnell Douglas. The Phantom was used by the…

Interview with Jerry Beaulier on the USN F-4 Phantom

Jerry Beaulier chats about his time flying the USN F-4 Phantom, his 221 combat missions over Vietnam, his Mig-21 shoot down, TopGun and being a test pilot. Help keep the channel going: https://www.patreon.com/aircrewinterview or donate - http://www.aircrewinterview.tv/donate/

Interview with Tony Dixon on the F-4J(UK) Phantom

Tony Dixon is a former RAF Canberra and F-4 Phantom Navigator. In this interview, we, focus on his time flying the F-4J(UK) Phantom and how it differed to the FGR2 that was serving alongside it. He also talks about the…

This is a jet engine sound version. There is a music version. https://youtu.be/Hn0vjDxaT8w